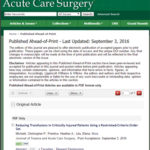 The November issue of the Journal of Trauma and Acute Care Surgery carries a number of articles related to the June 2016 Report of the National Academy of Sciences, Engineering and Medicine (NASEM) titled A National Trauma Care System: Integrating Military and Civilian Trauma Systems to Achieve Zero Preventable Deaths After Injury.

Authored by various military and civilian stakeholders in trauma care and trauma systems, the papers provide evidence and support that bolsters the NASEM report recommendations, specifically those to establish a National Trauma Research Action Plan, to ensure military and civilian systems participate in structured quality improvement, to include prehospital care as a seamless component of healthcare delivery, and to develop joint civilian and military trauma system training platforms in order to sustain an expert trauma workforce.

In their introduction to the issue, Kyle Remick, MD, David Baer, MD, and Todd Rasmussen, MD, suggest that an increasing number of mass casualty events on the home front necessitates a more significant investment in research. “It’s time to carve out funding for civilian trauma research in the national budget and to create a unified plan,” they say.

In another article titled “A National Trauma Care System: From Call to Action,” Dr. Rasmussen agrees that in order to achieve the aim of Zero Preventable Deaths, various stakeholders will need to work together—medical examiners, directors of emergency medical systems, emergency medicine physicians and trauma and acute care surgeons in both military and civilian settings. Director of the Combat Casualty Care Research Program, Rasmussen notes there is no need to “start from scratch,” as there are plenty of examples of interagency cooperation and programming from which to build, including NRAP and MHSSPACS.

Alexander Eastman, MD, William Fabbri, MD, Kathryn Brinsfield, MD and Lenworth Jacobs, MD, author a paper, “Improving National Preparedness for Intentional Mass Casualty Events,” in which they envision the seamless system that is needed to respond to such horrific events. They urge the empowerment of the “whole community” in order to arrive at novel approaches to the complicated problems related to national preparedness: a secure and resilient nation with capability to prevent, protect against, respond to, mitigate, and recover from threats and hazards.

“We still lack the seamless system needed to save lives,” they conclude. While the Joint Theater Trauma System is a powerful, data-driven and evidence-based system for military care, they argue there is no comparable system on the civilian side—“the result of a distribution of ownership of the various phases of the civilian health care system, the elusive goal of collecting medical information in a uniform, searchable format, and legislation intended to preserve individual medical confidentiality.” The consequence, they say, is that “conjecture, bias and anecdote inform the civilian section of our national response rather than scientific evidence.”

Dr. Remick and Eric Elster, MD, in an article about combat surgeon readiness, share the history of the Military Health System Strategic Partnership with the American College of Surgeons (MHSSPACS) and reiterate the need to “preserve and protect the resources forged through the sacrifices of American service members injured in battle.” Through a resurgence of the Excelsior Society—comprised of current and former military surgeons—ACS developed a combat surgeon course to begin to standardize and make more comprehensive military/civilian trauma skills partnerships and training programs.

Both the Coalition for National Trauma Research and the American College of Surgeons provide position papers in the JOT issue offering their support for the NASEM conclusions and recommendations, as well. Both organizations point to the specific recommendations that fall within their purviews and welcome involvement as an implementation plan to achieve zero preventable deaths after injury is developed.

Read the articles in JOT Publish Ahead online.